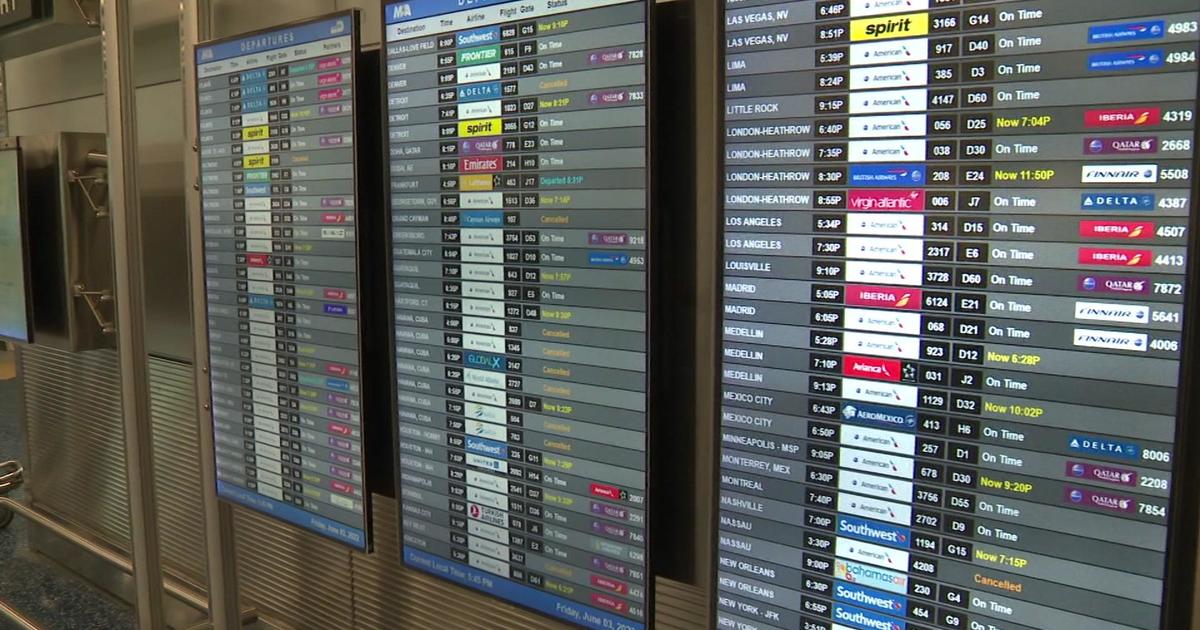 Looking at the flight information board displaying late afternoon and evening flights, we noticed more than 20 cancellations between arrivals and departures among various airlines.

It left many passengers we spoke with frustrated and stranded.

“My app just said a canceled status, and that’s how I knew the flight was canceled,” shared American Airlines passenger Stacy Sammy.

She’s upset, trying to travel home to Spain, waiting in long lines at the airport to rebook.

“Nobody is saying anything,” Sammy said. “We’ve been standing in this line for over an hour.”

The Montreal Convention, a universal treaty, allows passengers to claim compensation for the damages caused by travel disruption.

According to lawyer David Weinstein, passengers have less guaranteed compensation for expenses incurred on domestic flight cancellations or delays.

“If you’re flying on a low fare, low-cost airline, don’t expect to be compensated the same way you might be for one of the major airlines that has a better compensation policy,” said Weinstein.

Weinstein adds to check your airline’s website for more specifics.

Under federal law, airlines must provide a full refund to customers if a flight is significantly delayed or canceled, and the passenger chooses not to travel.

If you continue to travel, the airline must do their best to rebook you on the next available flight.

With numerous cancellations at MIA, finding the next flight out could be difficult.

“We had 40 canceled flights yesterday due to staffing shortages,” said Greg Chin, communications director for Miami-Dade Aviation. “We expect potentially more this weekend.”

And this leaves many passengers frustrated. One woman checked her bags with medicine inside it, only to learn that American canceled her flight minutes later.

“We don’t know if we will be able to get a flight by tonight or in the morning,” shared Nalini Lancaster. “We checked out of our hotel and have nowhere to go.”

And that’s why it’s essential to ask your travel agent to see if the airline will help if you’re stranded for the night.

Joe Gorchow joins CBS4 News as a seasoned reporter and anchor with extensive live and breaking news experience. Joe’s competitive nature and passion for connecting with the community blend perfectly into his role at WFOR. He strives to provide the coverage our viewers deserve.