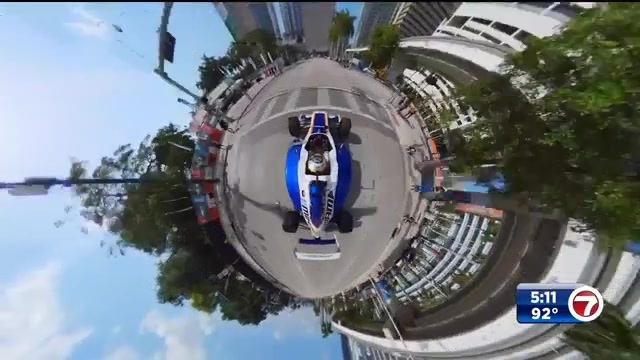 MIAMI GARDENS, FLA. (WSVN) – Racing fans across South Florida are getting ramped up, and hearts were racing at Hard Rock Stadium with one day to go before the inaugural Miami Grand Prix.

The professional racing fever was on display Saturday in different parts of Miami-Dade County. From a quick little burst of speed on Biscayne Boulevard in Miami, to fun racing-themed events and street-legal high performance vehicles in Bayfront Park, there’s something for everyone looking to take part in Miami Speed Week options.

When asked whether they’ll try out racing simulators at one of the tie-in events, a couple replied in unison, “Absolutely.”

Damiano Cicchinelli said he drove down from Orlando to be a part of the revved up fun.

“[I’m a] huge engineering guy on the civilian side, so to see how these cars – all the work that goes into it from an engineering aspect and put on the track by the teams is pretty impressive, really,” he said.

“They’re trying to make it like a Monaco, which is also on the coast. You have a lot of yachts, a lot of big money, and it’s a party city, so it’s the best place to have it,” said John Jasionowicz, who flew in from Nashville. “I was just out at Daytona, I was out in Texas, like, for the first race, I think that to make a good impression, it feels like they’re running things pretty well.”

It has been a hot world-class event in one of the hottest places, literally and figuratively.

Miami-Dade Fire Rescue spokesperson Erika Benitez advise those heading out to the outdoor racing events to be mindful of the sweltering conditions.

“Heat-related emergencies can be avoided if you take some proactive steps,” she said. “For example, it is important to drink plenty of cool fluids throughout the day to stay hydrated.”