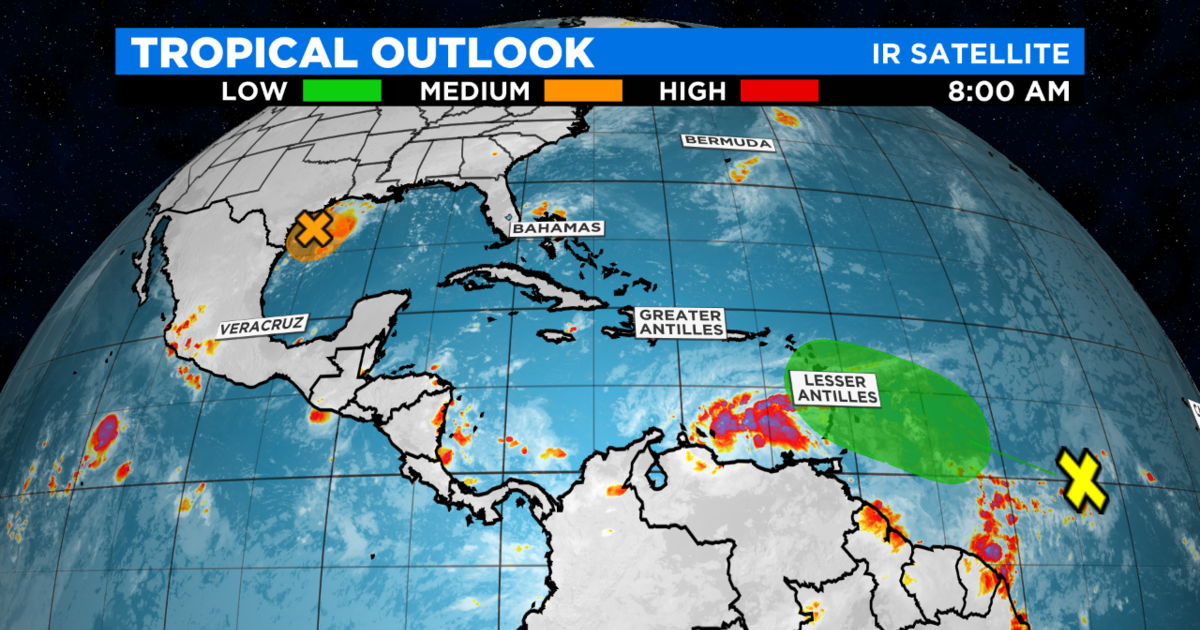 MIAMI – The CBS4 Weather Team continues to track three areas in the tropics but none of these disturbances are a threat to South Florida.

At 8 a.m., this disturbance was located about 185 miles east-southeast of Curacao and moving to the west at 30 miles per hour.

The National Hurricane Center said this disturbance has a high potential of developing into a Tropical Depression or Tropical Storm Bonnie.

“It could remain a tropical storm although there is a slight chance that it could become a hurricane. This is not a concern for us,” said CBS4 meteorologist Lissett Gonzalez.

This system is expected to continue moving westward or west-northwestward and pass near the southern Caribbean Sea and the northern coast of Venezuela on Wednesday, near the Guajira Peninsula of Colombia early Thursday, and over the southwestern Caribbean Sea on Friday. It is forecast to likely move towards Central America this weekend.

In the northern Gulf of Mexico, an area of low pressure is forecast to move slowly westward and approach the coast of Texas. This system has a medium potential for formation and it may become a short-lived Tropical Depression near the coast before it moves inland Wednesday night or early Thursday. Regardless of development, heavy rain will be possible along portions of the Texas coast for the next few days.

A tropical wave in the central tropical Atlantic only has a low potential of cyclone development over the next 2 to 5 days as it moves to the west. The wave is forecast to move over the Windward Islands late Friday or early Saturday and then over the eastern Caribbean Sea by the weekend where further development of this system is unlikely due to unfavorable environmental conditions.

Lissette Gonzalez has served as the morning and noon meteorologist for CBS4 News since 2007. Viewers can watch Lissette’s weathercasts weekday mornings from 5 to 9 a.m. and again at noon.