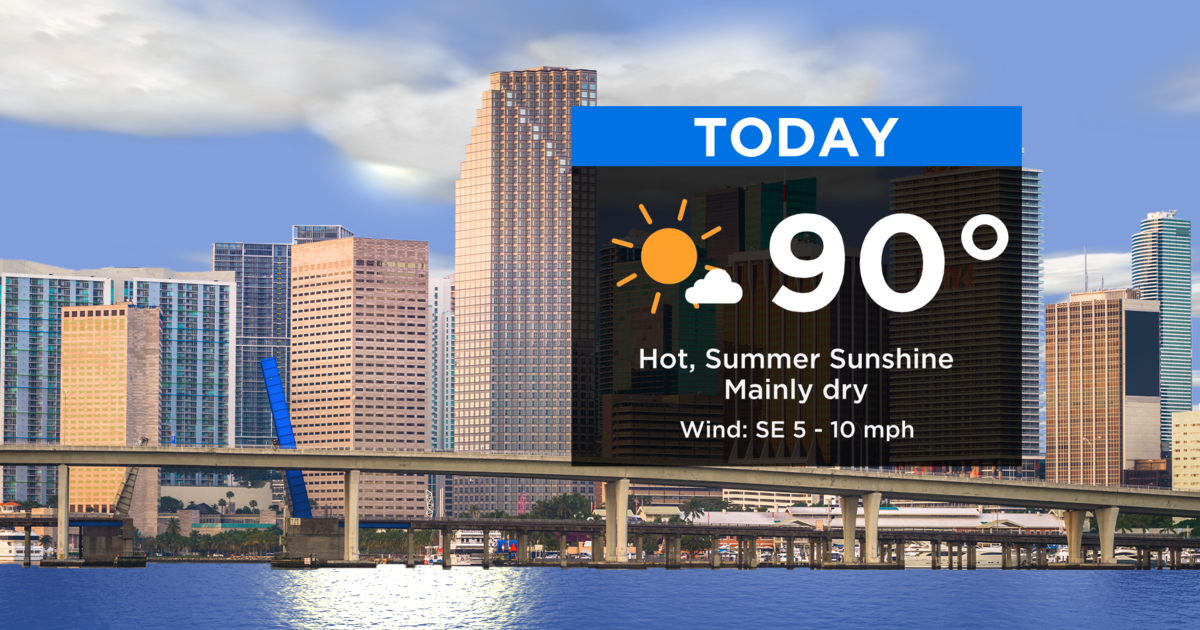 MIAMI – It was a comfortable start to Thursday with the mid to upper 70s in Broward and Miami-Dade. It was warmer across the Keys with temperatures near 80 degrees.

The humidity won’t be too high on Thursday but with less rain, expect more heat. Highs will be warmer and rise to around 90 degrees under the hot summer sunshine. The UV index will be extreme so don’t forget the sunblock and the sunglasses. The breeze is lighter and there is a moderate risk of rip currents at the beach. There are no advisories for boaters.

Thursday night’s lows will remain comfortable and seasonable in the upper 70s.

Expect partly cloudy skies and that is important to note since star gazers will try to get a peek at the so-called “planet parade” overnight and into Friday early morning.

The best time to look up to the east to catch this spectacular astronomical sight is an hour before Sunrise, around 5:30 a.m. Observers will see five planets of the solar system aligned in the sky: Mercury, Venus, Mars, Jupiter, and Saturn. Experts say this is the first time since December 2004 that the five planets will be visible at the same time from our planet. This type of big alignment won’t happen again until 2040.

An additional bonus is the waning crescent Moon which will shine between Venus and Mars. It will be slightly out of the “planetary line.”

Friday will be hotter as highs soar to the low 90s. As the humidity rises, it will feel like the upper 90s and triple-digits. The National Weather Service of Miami warns heat indices could reach up to 105 degrees. Staying hydrated will be key.

Spotty storms will develop Friday afternoon. Most storms will likely move inland and then push off to the west.

Saturday morning we’ll wake up with mainly dry conditions, the afternoon will heat up to the low 90s, and scattered storms will fire up. Most of the storms will likely be over the inland areas before marching westward towards the Gulf coast.

With even more moisture around on Sunday, the rain chance will be highest then. Highs will be in the upper 80s on Sunday through early next week.

Lissette Gonzalez has served as the morning and noon meteorologist for CBS4 News since 2007. Viewers can watch Lissette’s weathercasts weekday mornings from 5 to 9 a.m. and again at noon.