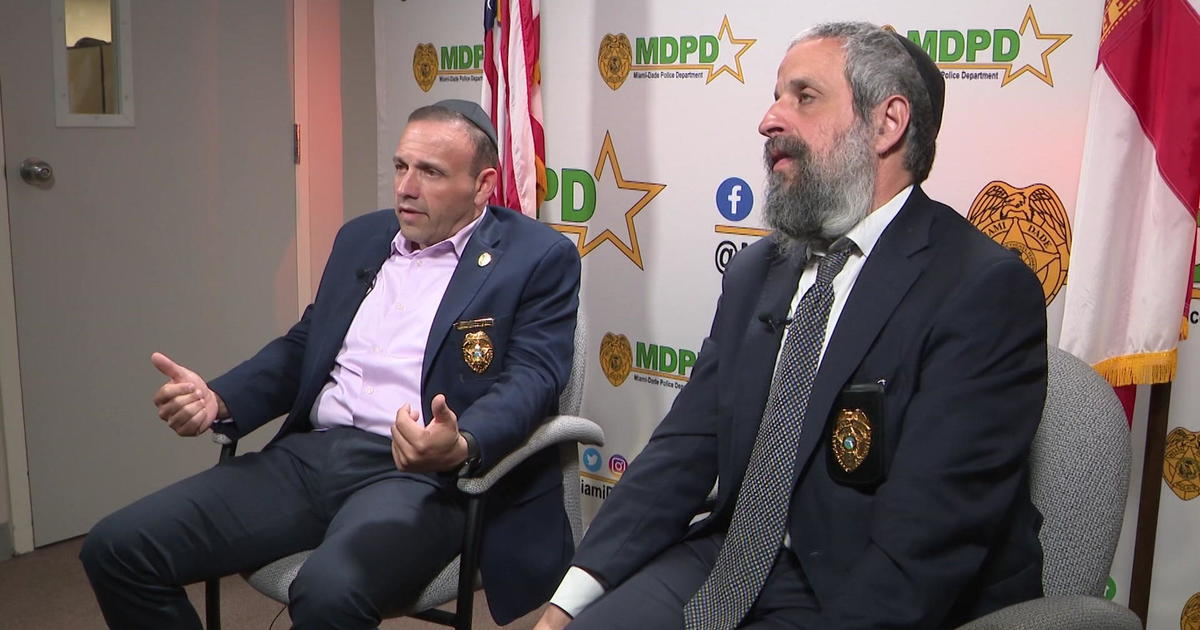 MIAMI –  Rabbi Mark Rosenberg is a seasoned police chaplain with the Miami Dade, Florida Highway Patrol, and formerly, the New York City police departments. He lives minutes away from the Champlain Towers in Surfside.

On the morning of June 24, 2021, he was notified of an emergency at the beachfront condo and arrived at what was a chaotic scene. He notified the Surfside mayor’s office and other police chaplains almost immediately. The dark scene was surreal and yet somewhat familiar.

He went into action helping people that had survived- the people on the streets who had ran out and left everything behind. He remembers that first few hours.

“There were people showing up and we (chaplains) are standing there with a yellow pad taking names, duplicate names, people with nicknames- it was chaos.”

As the sun rose it brought the reality of the level of devastation.

“I have been involved in a lot of trauma situations, plane crashes, this was different. This was people having a hopeless look in their eyes at the same time they were looking for any type of confidence for anything,” he said.

Fellow MDPD chaplain, Rabbi Yossi Harlig, who heads the Chabad of Kendall & Pinecrest, arrived a few hours after Rabbi Rosenberg. This is the first time he has encountered anything at all of this magnitude, and he will never forget it.

“Just hugging them [the families] and holding their hands, realizing that they are beyond shocked and panicked. Knowing their loved one is trapped- at that moment they thought they were just trapped in the building- not realizing what the inevitable is going to turn out so those were the first hour for me being on the site,” Rabbi Harlig recalled.

The two trained volunteers remained on site for both victims and first responders. They acted as liaisons between detectives and desperate families as the days went on. They offered support on many levels. They recall how well they worked with the MDPD and Miami Dade Fire Rescue personnel, that the coordination became vital, for all who were tackling an insurmountable task.

“We were there with the families, then ten minutes later we would speak to homicide or fire rescue who would just break down – who simply couldn’t handle what they were doing,” Rabbi Rosenberg said.

Looking back a year later now, when they get asked ‘what did you say to the families?’ The answer comes from having been trained to deal with trauma. You don’t say much, it is less about the words and more about the presence. Saying the wrong thing can do more damage.

“Our job is not to defend God. Our job is to be there with the people and hold their hand and look at them in the eye and say we are here with you,” said Rabbi Harlig.

From the rescue mission shift to recovery, and each painstaking day thereafter, they got to know each person who was awaiting news of a loved one’s recovery. It was personal, as Rabbi Rosenberg shared, they all knew him by name too, and relied on the chaplains in the most intense time in their lives.

They were with them until they could give each family much-needed closure. It was the pain that gave them the strength to stay strong every day.

From other people – they gave us the strength- we were not able to stop. When you have a mother telling you at the beginning “I have my 21 year old daughter that came here from out of the country for just one day’… the same mother 30 days later when I did the notification-she said ‘thank you for giving me the best news a mother can receive’ – that’s what gave us strength when the worst news becomes the best news,” Rabbi Rosenberg remembered.

The rabbis role was crucial for a largely Jewish population.

“The families are depending on us. We had to educate the first responders how you deal with Jewish bodies, because they wanted the families to get the comfort to know they were do everything according to the Jewish tradition,” said Rabbi Harlig.

Yet, even with tragedy all around, not every single memory is a painful one, Rabbi Harlig shared.

“When the President of the United States walked in and the first lady, the Governor, the mayor the senators, were all there in the room around 300- 400 people you didn’t see then Republican or Democrats, president or governor …it was all one family all wanting the same thing, all caring about the same thing, and feeling the pain in the room.”

Even a trained professional, this was a daunting mission. They said to keep it together meant being sensitive -not emotional. Professionals call it being on ‘red alert.’

“It’s such a heightened moment you just shut your emotions down and just work work work,” said Rabbi Harlig, recalling how hard it was to do anything other than be the chaplain for these people. Rabbi Rosenberg said it was hard to eat, to sleep, to put the entire thing aside. He says he knows how he got through it.

“Just doing what we got to do. The strength comes from God, from up above.”

Rabbi Rosenberg and Harlig have stayed in touch with many of the families, they are still working on returning religious items that were recovered to the families. And there is some good news on what came out of this tragedy in the role of police chaplains, we will share that story in part 2 of this special Miami Proud on June 23, 2022.

Lauren Pastrana is the co-anchor of CBS4 News weeknights at 5, 6, 7 and 11 p.m. She joined CBS Miami in April 2012 as a reporter. She is an Emmy-nominated, multimedia journalist with experience in television, radio and web-based news reporting.