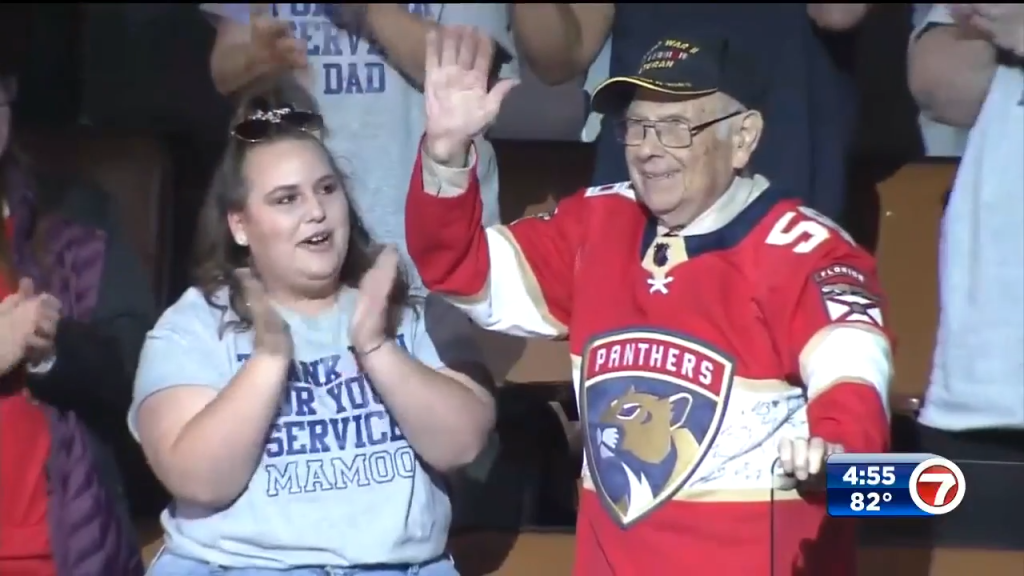 SUNRISE, FLA. (WSVN) – An honor on ice for a World War II veteran, who is just days away from his 97th birthday.

Ninety-six-year-old Harvey Middleman is a hero.

He works for the Florida Panthers and is being called a hero on and off the ice. He’s said to be impacting the lives of other veterans.

His employer, who has the top team in hockey, the Florida Panthers, knows it.

As odd as it sounds, the nearly 100-year-old veteran is still working.

“We don’t have many 94-year-old employees on our books, but Harvey wanted to be a part of it,” said Florida Panthers President and CEO Matthew Caldwell, “wanted to show up every night, and he has.”

A few years ago, the team had brought Harvey onto the ice to honor his service. It made him feel so good that he wanted to share the experience with other veterans.

“Truthfully, I volunteered, but then I found out I’m getting paid for it, and that’s my poker money,” said Harvey.

He has been working for the team ever since.

“I get as emotional as they do because I know what they have gone through because I went through it before them,” said Harvey. “Even with the family, the way it impacts the family.”

Family is what Harvey said what got him into the military. His brother survived Pearl Harbor. Harvey was barely in high school when he had tried to enlist.

“He, uh, chief petty officer that was recruiting looks at me and says, ‘When you get out of diapers come back,’” said Harvey.

He did and was later part of three combat invasions with the Navy Seabees.

“Serving my country was a privilege for me and an honor, and I wish I was physically able to do it again,” said Harvey.

It shows why he is part of what they call the greatest generation.

“Everybody gave wholeheartedly,” he said. “I mean, I don’t think at that time anybody even thought of not going.”

Two weeks ago, the Panthers had surprised Harvey by flying his whole family out for a game. He was able to hug people he hadn’t seen in years.

“I start seeing individual faces. It’s overwhelming. I get overwhelmed, and in Jewish it’s called verklempt, and even thinking about it, I tear up,” said Harvey.

For the 2021 playoffs, Harvey was able to be in the locker room with the team where he shared a message.

They put the motto on a shirt and every team member signed it, and Harvey wears it with pride.

Although the Panthers were close to winning last year, Harvey thinks this is the year they will get it done.

“Oh, I know we’re gonna win, and they promised me to come down to be with the year of the Stanley Cup,” said Harvey, “which I’m looking forward too. That will be the highlight of my life.”

Harvey turns 97 years old this week, which is the same week the Panthers will be starting to chase the Stanley Cup.