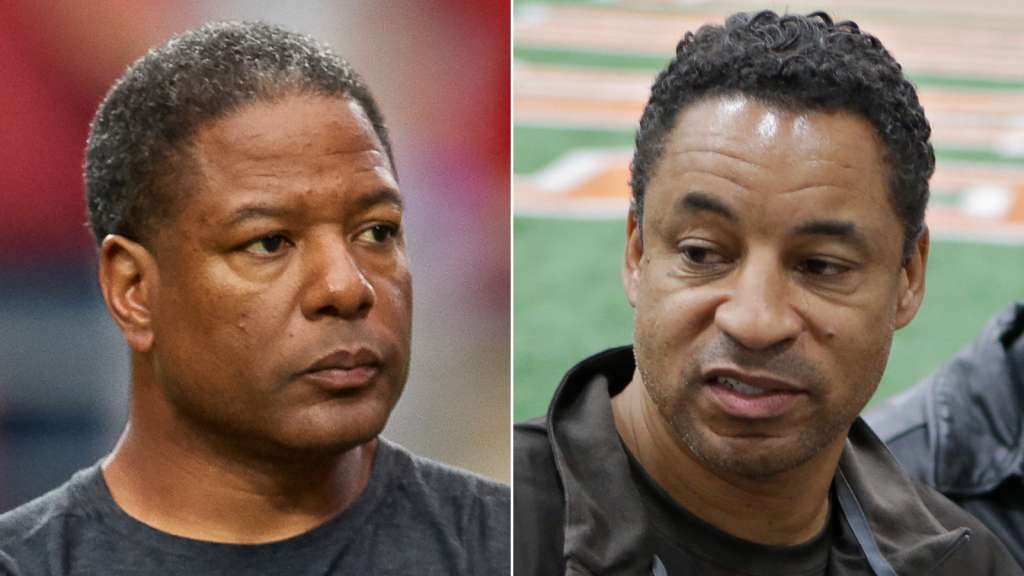 In the complaint, Wilks claims he was unfairly fired by the Cardinals; Horton alleges the Tennessee Titans put him through a “sham” interview process.

Flores filed his federal civil lawsuit in February against the NFL, the New York Giants, the Denver Broncos and the Miami Dolphins organizations.

Flores, now a Pittsburgh Steelers assistant after three years as the Dolphins head coach, praised the two men for adding their names to his lawsuit.

“I continue to be humbled by the outpouring of support in connection with my claims against the NFL and applaud Steve Wilks and Ray Horton for standing up against systemic race discrimination,” Flores, who is Black, said in a statement. “Their claims are the unfortunate reality of the problems facing Black coaches in the NFL which our collective hope in this case is to end once and for all.”

Flores Thursday also expanded on his claims against the Dolphins and added the Houston Texans as a defendant.

The NFL declined to comment Thursday on the amended complaint.

When Flores first filed the suit, the league said: “The NFL and our clubs are deeply committed to ensuring equitable employment practices and continue to make progress in providing equitable opportunities throughout our organizations. Diversity is core to everything we do, and there are few issues on which our clubs and our internal leadership team spend more time. We will defend against these claims, which are without merit.”

The teams named in the suit have denied the allegations.

Wilks claims he was “unfairly and discriminatorily fired” by the Cardinals after he served as the team’s head coach for the 2018 season, according to the court document. Wilks was replaced by Kliff Kingsbury, who is White, after going 3-13 that year. In the suit, Wilks argues Kingsbury was given more opportunity and support, despite having no prior NFL experience.

“When Coach Flores filed this action, I knew I owed it to myself, and to all Black NFL coaches and aspiring coaches, to stand with him,” Wilks said in a statement through his attorneys Thursday. “This lawsuit has shed further important light on a problem that we all know exists, but that too few are willing to confront.

The Cardinals called the decisions made after the 2018 season “very difficult ones” in a statement. “But as we said at the time, they were entirely driven by what was in the best interests of our organization and necessary for team improvement. We are confident that the facts reflect that and demonstrate that these allegations are untrue,” the team said.

Earlier this year, Wilks was named the pass game coordinator and secondary coach for the Carolina Panthers after spending one season as the University of Missouri’s defensive coordinator.

According to the lawsuit, Horton, who was the defensive coordinator for the Titans in 2014-15, said the team asked him to fly from his Phoenix home to Nashville on short notice to interview for their head coaching vacancy. Horton’s lawyers claim the interview was a “sham” and only done “to comply with the Rooney Rule and to demonstrate an appearance of equal opportunity and a false willingness to consider a minority candidate for the position.”

The NFL instituted the Rooney Rule in 2003 in an effort to increase diversity among the NFL’s head coaching, general manager and executive ranks. The rule requires every team to interview at least two external minority candidates for open head coaching positions.

The Titans hired Mike Mularkey, who is White, who said in a 2020 podcast that it had been a “fake” hiring process, and he knew he had the job before other candidates were interviewed, according to the lawsuit.

Horton left to become the defensive coordinator for the Cleveland Browns. Horton was last the defensive backs coach for the Washington Commanders during the 2019 season.

“I am proud to stand with Coach Flores and Coach Wilks in combatting the systemic discrimination which has plagued the NFL for far too long,” Horton said in a statement through his attorneys on Thursday. “When I learned from Coach Mularkey’s statements that my head coach interview with the Titans was a sham, I was devastated and humiliated. By joining this case, I am hoping to turn that experience into a positive and make lasting change and create true equal opportunity in the future.”

The Titans said they are proud of their commitment to diversity.

“Our 2016 head coach search was a thoughtful and competitive process fully in keeping with NFL guidelines and our own organizational values,” the Titans said in a statement to CNN. “No decision was made, and no decision was communicated, prior to the completion of all interviews.”

Mularkey was fired by the Titans after the 2017 season.

“It’s a very cutthroat business, and a lot of guys will tell you that. But I allowed myself at one point when I was in Tennessee to get caught up in something I regret, and I still regret it,” he said of being told he had been given the job before the team went through the requirements of the Rooney Rule.

“And so I sat there knowing I was the head coach in 2016, as they went through this fake hiring process knowing, knowing a lot of the coaches that they were interviewing, knowing how much they prepared to go through those interviews, knowing that everything they could do and they had no chance to get that job,” he said.

In the new court document, Flores expanded on claims that the Dolphins and Texans took “retaliatory” actions against him. Flores alleges that the Dolphins have both failed to pay out the remainder of his contract and have attempted “to claw back compensation paid to him” in an arbitration proceeding.

Flores also alleges that the Texans, who were added as a defendant, declined to hire him this offseason as head coach “due to his decision to file this action and speak publicly about systemic discrimination in the NFL.”

Flores was considered a finalist for the Texans job, which eventually went to Lovie Smith. Smith is one of two Black head coaches in a league where nearly 70% of the players are Black.

Mike McDaniel, who has a Black father and identifies as biracial, according to ESPN, replaced Flores as head coach of the Dolphins.

“The search for our head coach was very thorough and inclusive,” the Texans said in a statement to CNN Thursday. “Due to his previous success as a coach in the NFL, Brian Flores was among the first candidates we held a formal interview with for the position and he remained a candidate until the very end. We have a lot of respect for Brian both personally and professionally; he has been a competitive coach in the league for a number of years and his resume speaks for itself.

The organization said it was proud of its decision and “will vigorously defend our process.”

The Dolphins fired Flores in January. He went 24-25 in three seasons with the Dolphins, including a 9-8 record this past season when Miami missed the playoffs. In February, Flores was hired by the Pittsburgh Steelers as an assistant coach to Mike Tomlin, one of the few Black head coaches in the NFL.