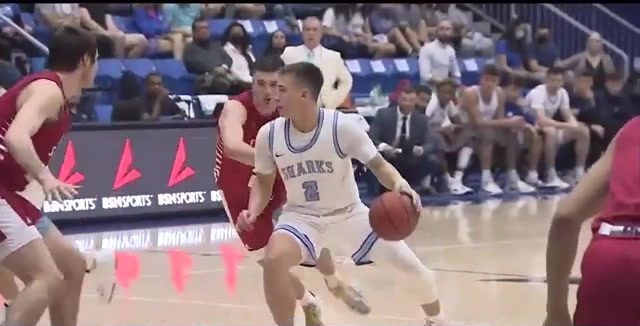 (WSVN) – Just weeks away from the college hoops March Madness, a team in South Florida’s backyard is having a special season on the hard wood.

“I don’t think I’ve stepped back and looked at it objectively yet,” said Sharks head coach Jim Crutchfield. “I do feel a buzz. I feel a little bit of buzz, not just within our own basketball program, but on campus a little bit.”

“At the end of the year, that doesn’t matter — if you’re defeated or not,” said Sharks guard Nick Smith. “It just matters if you won the last game and that’s what we’re trying to do.”

The Sharks have been preying on every team in their way.

NSU averages about 100 points a game.

“The defense generates the offense,” Crutchfield said. “We’ve never ever talked about the number of points we wanna score. It’s just about out scoring your opponent. I think the high numbers is a byproduct of the aggressive way we play on both ends.”

“I think if you check the box scores everyday, there’s somebody doing something different every game,” Sunahara said. “We got a lot of guys who can impact the game in different ways.”

The Sharks started the season ranked 13th in the nation, despite not playing a game last season due to COVID-19.

“We sat last year, didn’t play ’cause of COVID,” Smith said. “That makes it even more special just to be the last remaining undefeated team. Now, we got a target on our back every game and it’s something we wanna defend and we gotta defend everyday.”

When you’re undefeated, some things become more than just routine.

“I’m going for the Mr. Miyagi look,” said Sunahara as he pointed to his mustache.

“I don’t think I’m superstitious, but yes, I touch a palm tree everyday,” Crutchfield said. “Yes, I wear the same tie pin everyday, just in case there is some force there that’s helping us win.”

“If it ain’t broke, don’t fix it, you know,” Sunahara said. “If you just keep the same things going everyday and we keep winning, why not keep it going?”

The Sharks will look to prey on another appointment on Saturday when they host Rollins College, where NSU sets to make their new record 23-0.