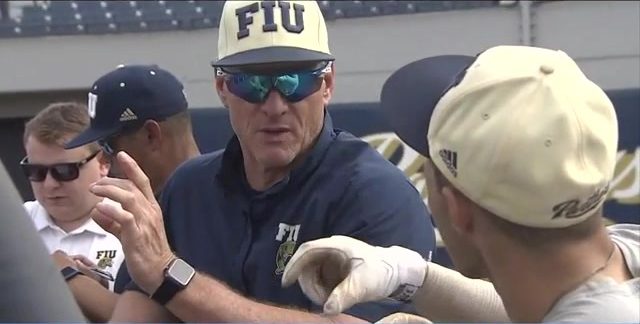 Those who have followed the Marlins since their World Series run, their first one in 1997, know Jeff Conine.

He was a fan favorite who used to love the game. He’s back in it — but on a different level.

For some South Florida baseball fans, Conine will always be known as Mr. Marlin.

“All of that other stuff, it’s in the past, you know, I’m here now and I’m trying to bring knowledge that I experienced over my 20 years in professional baseball. Hopefully, I can translate that to them and they can use it on the field,” he said.

Conine is a former two-time World Series Champion with the Marlins.

He’s also a two-time All Star.

Conine wasn’t solely hired as the Panthers’ Associate Head Coach based on what he once did in the majors.

From the head coach to the players, they all agree: having 55-year-old Conine on the staff has been a big plus for the program to share his knowledge of the game.

“Learning from the man himself, somebody who did it at the highest level, you can’t get any better than that,” said FIU pitcher Jan Figueroa. “We throw so many questions at him, how do we approach hitters, so it actually benefits both sides. I’m a pitcher so you get the hitters benefitting from this but also the pitchers asking a lot of questions.”

Aside from being on the bench on game day, Conine is the team’s hitting coach.

He doesn’t want his players to try and copy his style of hitting.

“I told them all, like, I’m not here to change you,” said Conine. “I’m here to refine what you already have. What you are as a hitter right now is the hitter you’ve been your whole life and I’m not looking to do any radical changes. I like to work more on the mental side of it.”

Players have questions for Conine when they’re at the plate.

“I’ll probably go to him after my first to bat, honestly,” said FIU outfielder Alec Sanchez. “He won’t tell us what we’re doing wrong, he’ll just ask us what the plan we had [was] and approach we had and that will lead to the next to bat.”

Conine will also work with the outfielders.

“That’s the one thing I’ve ever done, is baseball, and I love to teach it,” he said. “When this opportunity came up it was natural for me. People ask me, ‘Have you been surprised with anything with this job?’ and I say, ‘Yeah, I’m surprised how much I’m loving it.’”

Right out of the gate, Conine had some fun coaching against Saint Thomas of Minnesota this weekend.

The Panthers scored 19 runs on 33 hits and three home runs to take the four game series.