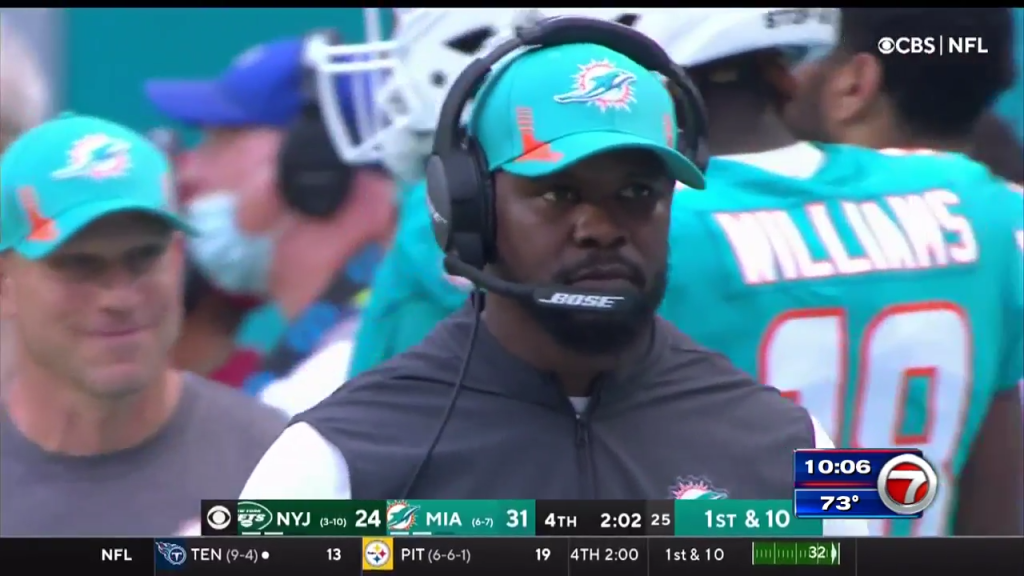 (CNN) — On February 4, 2019, the Miami Dolphins introduced Brian Flores as the team’s 13th head coach at a press conference full of smiles and heady talk about the team’s future.

It was the day after Flores had won his third Super Bowl as a longtime assistant coach with the New England Patriots, and his new boss sang his praises.

“Two things that stand out immediately when you meet Brian are his football intelligence and leadership skills,” Dolphins’ general manager Chris Grier said. “Brian is widely respected throughout the NFL … Brian sets a high standard for his players and coaches and we are completely aligned with our vision on how to build a successful organization.”

Even though Flores led the Dolphins to back-to-back winning seasons for the first time in almost two decades, the team fired him last month. This week Flores sued the NFL and three of its teams, including the Dolphins, alleging racial discrimination.

Flores, 40, who is Black, told CNN his three children are part of the reason he filed the lawsuit.

“I have two sons, eight and seven. I got a five-year-old daughter,” he said. “When I look at them, I don’t want them to go through some of the things I have had to go through.”

Growing up in Brooklyn made him tough
Flores is a child of Honduran immigrants and grew up in Brownsville, a neighborhood of east Brooklyn, New York, that’s long been plagued by poverty and crime.

He has described his mother as loving but strict. He and his brothers were expected to come straight home from school and immediately start on their homework.

“My parents immigrated here in the ’70s and they came here to build a better life for me, my brothers and my entire family,” he said at the Dolphins’ 2019 press conference. “They worked hard, extremely hard. We didn’t grow up with a lot but what I did grow up with — and I feel like this is lost in a lot of the stories — is that I had a great childhood.”

Even so, the family faced challenges. They lived in a 20th-floor apartment in a public housing building. Sometimes, Flores once told a Florida columnist, the elevator didn’t work and they had to use the stairs.

An ESPN profile of Flores said both his younger brothers were mugged at knifepoint in Brownsville, and the family heard gunfire in the streets almost every night.

“I was tested many times,” Flores told ESPN in 2018. “I never backed down from anybody. If people see you’re scared, or as somebody who backs down, you’re going to deal with it every day. That was my thing. I didn’t back down from anybody or any situation. Football, school, anything.”

Flores began playing football at age 12. His ability got him noticed by a coach at Poly Prep Country Day, a private school in Brooklyn that offered him a scholarship. By his sophomore year, he was one of the team’s stars.

Flores has said Brownsville helped steel him for a career in football.

“It shaped me in a lot of ways,” he told ESPN. “It made me tough. I learned how to deal with adversity, and it motivated me to get out of there.”

He helped build a winning tradition with the New England Patriots
Spurning other offers, Flores chose to play linebacker at Boston College, where he was part of four bowl-winning teams. He graduated with a bachelor’s degree in English and a master’s degree in administrative studies.

An injury late in his senior year torpedoed his chances of auditioning for an NFL team. But he was hired by the Patriots in 2004 as a scouting assistant. He told Sports Illustrated the job demanded long hours and didn’t pay much — about $20,000. He slept on an air mattress in a friend’s attic.

Eventually he was promoted to a scout and then an assistant coach under Bill Belichick.

Flores’ expertise was defense. He coached safeties and linebackers for six years, then was promoted to calling defensive plays during games.

In all he spent 15 years with the Patriots, during which time the franchise won four Super Bowls.

Flores has said that while working with the Patriots’ safeties he began to see the effect he was having on the players, which got him thinking about becoming a head coach.

“I could see them developing not only on the field but off the field, and their relationships with their families, with their wives and with their kids, and it felt like I was really making an impact,” he said in 2019. “I’ll say this — I was very demanding with that group, but they knew I cared, they knew I loved them, they knew I respected them.”

A month after he was hired by the Dolphins, Flores’ mother Maria died of cancer. He had called her before every one of his games with the Patriots.

“The one thing I have peace in,” he told Sports Illustrated shortly before she died, “is that I know I have done everything possible to make her proud and to make her happy.”

Flores says Black people in many fields feel pressure to be exceptional
Flores’ lawsuit has sent shock waves through the NFL, which has long faced scrutiny for its record on hiring minorities as coaches.

In a league where roughly 70% of the players are Black, there is only one Black current head coach. There are two other non-Black minority coaches in the NFL: one of Puerto Rican and Mexican descent, and one of Lebanese descent. Five other teams are looking for a head coach.

In his lawsuit Flores accused the New York Giants of interviewing him last month for their vacant head coach job under “sham” circumstances. Three days before the interview, Flores said he received a congratulatory text message from Belichick, his old boss in New England, that was intended for Brian Daboll, who got the Giants job.

Flores said he felt humiliated and angry when he found out he’d been invited for an interview even though the team had already decided on Daboll.

The NFL has called Flores’ allegations meritless, saying the league is “deeply committed to ensuring equitable employment practices” and that “diversity is core to everything we do.” The Dolphins, Giants and Denver Broncos also have denied the lawsuit’s allegations.

Now his life and career are at a crossroads
Flores’ future in the NFL appears complicated. He remains a candidate for other NFL coaching jobs, but has said he won’t drop the lawsuit if he gets hired by a team in the next few days.

He could be back on the sidelines next season or ostracized by the league, as some believe former quarterback Colin Kaepernick has been.

One expert believes Flores’ lawsuit will create obstacles for him in pro football.

“In his heart, he knows he’s a professional coach and he belongs in the NFL,” said Louis Moore, an associate professor of civil rights and sports history at Grand Valley State University in Michigan.

Moore told CNN he believes Flores’ stand will long be remembered as a key moment in pro sports.

“For future Black coaches, hopefully this will mean more opportunities,” Moore said. “But the real change … will be when others … change their thinking on hiring candidates.”

Flores told CNN this week he understands the risk he is taking with his lawsuit. But he said it’s important to him to take what he feels is a principled stand.

And, sooner or later, he hopes to coach in the NFL again.