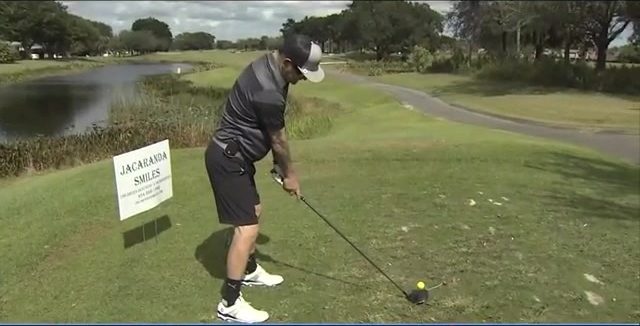 (WSVN) – These golfers are defying odds no matter what life puts in their way.

Golf is a difficult sport. Imagine doing it in the dark.

That’s what it’s like for Britton Munoz and other golfers participating in the United States Blind Golf Association tournament.

“It is a feel thing,” Munoz said. “Anybody out there, try it. Close your eyes, go out and try to hit a golf ball. It’s not as easy as you think.”

After progressively losing his sight while being a policeman, Munoz is now a full-time golfer and can’t see himself doing anything else.

“When you walk down the fairway, you’re free, you feel like you’re not visually impaired,” he said. “You feel like you’re normal again. A lot of people have asked me if I would want my vision back and I say, ‘No,’ because I have met so many wonderful people with my vision loss and competing in different states that I probably would never have gotten to experience with my vision, and it’s just exciting. I love golf to no end. I’m a golfaholic.”

For Munoz and the other golfers on the tour, they all live by the motto “You don’t have to see it to tee it.”

“We believe that every single day, all of these folks that are fellow golfers of mine all believe that,” said USBGA President Greg Hooper. “Some of them have been playing this game, visually impaired, for 20, 25 years. Our oldest member that is here at this tournament is 88 years old. He doesn’t hit the ball very far, but he has the time of his life out there.”

Traveling the world and competing against other visually impaired golfers, the players who make up the USBGA are among the most inspiring golfers on the planet.

“It’s pretty amazing to see the skill even though we don’t have the sense of vision, it’s almost like a sixth sense that they’ve nurtured to be able to use,” said caddie Mark Moore.

Every golfer on the tour will admit that they’re nothing without their caddie.

“Your coach is basically 99% of your game,” Munoz said. “I can’t golf without him. I mean, I can hit a golf ball to tee box, but I could never find it.”

Which makes things a bit easier after any bad shot.

“Being visually impaired, you can’t get mad because you don’t know where it goes,” Munoz said. “I just know it’s a bad shot and I just go to the next golf ball.”