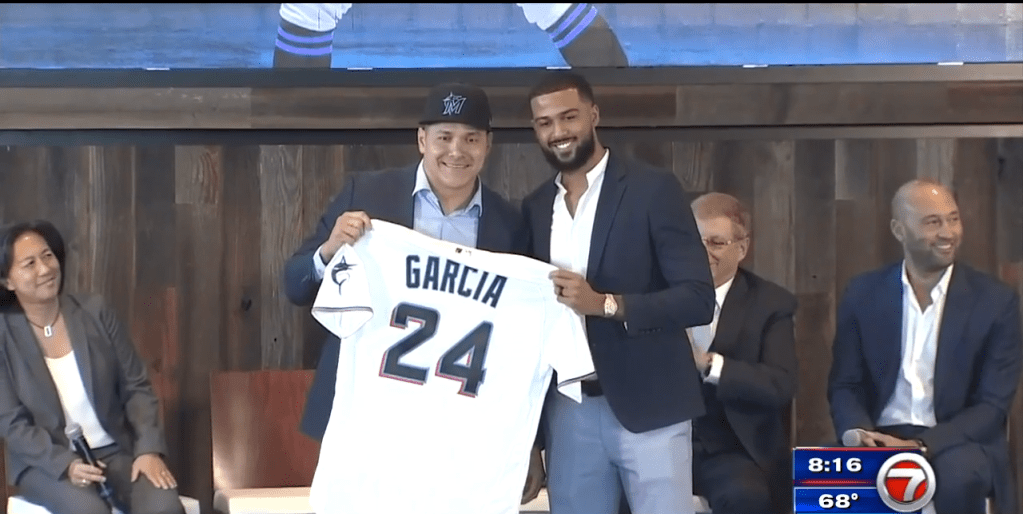 MIAMI (AP) — Avisaíl García made his lone All-Star Game appearance on the Miami Marlins’ field. He has owned a house in the city for a few years. The native of Venezuela considers Miami home.

That said, he still had to pass Derek Jeter’s test.

It was at a breakfast with García a couple of weeks ago when Jeter needed assurance that the 30-year-old outfielder truly understood what it would mean to join a team that is building around a young core and thinks it’s on the cusp of finally starting to realize its potential.

“I wanted to look him in the eye,” Jeter said.

The Hall of Famer liked what he saw. The Marlins formally introduced García on Wednesday at their ballpark, with Miami ace Sandy Alcantara — another recipient of a freshly inked contract from the team in recent days — handing him his cap and new No. 24 jersey.

“It was obvious that he wanted to be here,” said Jeter, the Marlins’ CEO. “I’ve dealt with a lot of people in my life and I think I’m a pretty good judge of character in terms of when someone’s telling me the truth or not, and you could see in his eye he was excited at the possibility of coming here. That’s what you want to hear.”

García’s signing — four years, $53 million with the potential for an option year in there as well — was finalized Wednesday. Alcantara’s five-year, $56 million deal with an option for a sixth, was completed Tuesday.

García gets $12 million annually, and the Marlins have a $12 million option for 2026 with a $5 million buyout.

With a labor impasse looming, the Marlins got plenty of things done. Miami is now García’s fifth team, one he joins after hitting 29 home runs with 86 RBIs — both career bests — for Milwaukee in 2021.

In parts of 10 seasons, García has batted .270 with 127 home runs and 475 RBIs. He has played almost exclusively in right field, with limited time in center and left as well.

“I’m blessed, to play for the team that you like, to be home with my family,” García said. “I think it’s a blessing.”

“As I looked at the club from spring training on, it really crystallized to me that Sandy was that quintessential ace of the staff,” Marlins general manager Kim Ng said.

Ng, Jeter, owner Bruce Sherman and Alcantara were on a makeshift stage Wednesday at the team’s ballpark, under a giant video screen with a simple message.

Got him for years, too.